In 2019 the Lady’s-slipper Orchid was reported in favourable status, though in Bulgaria only 5-10 blossoming plants are recorded per year.

Following the NGO appeals (see ZeleniZakoni position below) and media discussions about the fake reporting  on Natura 2000 by Bulgaria, the Institure of Biodiversity and Ecosystem Research at the Bulgarian Academy of Science published two positions and firmly stated the state reported using "old and outright faked data" and that "The responsible attitude towards nature and society requires we acknowledge that the necessary studies in order to prepare the reporting have not been carried out and that chaotic and substantially untrue information has been sent about the status of the target species and natural habitats in Bulgaria."

The national Environmental Agency tried to validate its report but its statement showed that the data it had used for the report was dated from 2012 till 2014 and no recent research for monitoring was carried out.

The “Green Law” (Zeleni Zakoni) initiative carries out analyses on the problems of environmental legislation and protecting Bulgarian nature. The protected sites of the European environmental network “Natura 2000” should have been a key instrument for conservation in Bulgaria. That is why, with this article we are launching a series of analyses on the process of the government’s reporting on the conservation status of Natura 2000 in Bulgaria.

The scientific approach is at the heart of the conservation of European nature, and that is why the Habitats Directive requires that countries conduct regular surveillance on the conservation status of species and habitats protected by Natura 2000 (Art. 11). This should be a continuous process, accompanied by relevant scientific evaluations and publications. Every 6 years, Member States should analyse these studies and on this basis report to the European Commission the trends in improving/worsening the status of the protected species and habitats (Art. 17).

The first report by Bulgaria as an EU member state was submitted in 2013. It covered the period from 2007 to 2012, and included not only the research done for the freshly issued Bulgarian Red book `2012), but also the additional 2-year large-scale fieldwork data gathered research work done by the Bulgarian Academy of Sciences. Unfortunately, the reported results were “improved” by the Ministry of Environment and Water just before submission, in order to report more species as being in favourable status. Some flagrant examples can be cited of species which had not been observed for decades – and were supposed to have been extinct but were nevertheless reported as in favourable conservation status. Logically, a few non-governmental organisations reacted against that and the report was disputed during its review by the European Commission in 2014. That is why in the end the Commission corrected the disputed assessments at a European level.

Since 2014 discussions have been held on how the species and habitats in Bulgaria are to be assessed and reported. Operative programme Environment 2014-2020 had planned BGN 18 mln for these two activities. Many suggestions were made for the research to be directly assigned to the Bulgarian Academy of Sciences. In this way the reported results would be based on scientific data and would be subjected to a serious scientific review and publication monitoring.

However, the Bulgarian Ministry of Environment decided to allot that task via a public tender to commercial companies. A tender procedure was started and since some firms appealed against, the whole process was delayed for 4 years. The contracts for research and reporting with the appointed firms were signed at the beginning of 2019. During that period field work was done only for a few species and habitats. Thus Bulgaria actually “skipped” fulfilling its obligation to carry out regular research into all the protected environment according to the Directive (Art. 11).

That was not considered as a problem by the Ministry of Environment and on 28 August 2019 the report on the current status of species and habitats was officially submitted for review to the European Commission. Despite the lack of fieldwork, the conservation status of many species has been changed from favourable to unfavourable - based on the corrections made by the European Commission to the 2014 report, on the 2005-2012 research data for the Red book from the period, and on the ones from the previous reporting (2010-2012),

Within the analysis of the change in the assessed status, the report stated that it was due to the a modification in the assessment itself, and did not reflect any actual deterioration in the conservation status of the species – meaning that that the previous positive assessment was wrong, and the last one is the real one. The latest assessments have actually also been boosted to a heightened state, because many species have a status that is bad and not inadequate.

Three months later, in the middle of November 2019, after grave conflicts between the companies contracted by the Ministry of Environment and the ministry itself, and due to a failure to obtain BGN 8 mln for the marine “Natura 2000”, some media suddenly began heavily to attack the reporting.

The Ministry of Environment and the firms that had conducted the reporting procedure were accused that their reporting “worsened” conservation status of the habitats and species and the European Commission would force Bulgaria to expand the territorial coverage of “Natura 2000” extension by the and to totally stop any development of the country!

On 28 November 2019 all the employer associations submitted an ultimatum to the prime minister demanding that the conservation status assessments to be changed. As a result, the Ministry of Environment did so on 9 January 2020.

169 species were once again announced to be in a favourable status, with many flagrant examples of entirely inadequate assessments. For example, a favourable status was stated for extremely rare species such as globally threatened Mouse-tailed Dormouse and the rare Lady’s-slipper Orchid, the Balkan endemic Viola delphinantha and the local endemic Alburnus mandrensis and Alburnus schishkovi, as well as the endangered Stone Crayfish. At the same time, the number of the species with unknown status was extremely increased. 123 species were announced with an unknown status. These, include many fish species which have been monitored by non-governmental organisations and fishermen and which are plainly established as close to extinction – e.g. the sturgeons.

Figure 1. Distribution of the number of the assessments of the status of species for the period from 2013 to 2019. 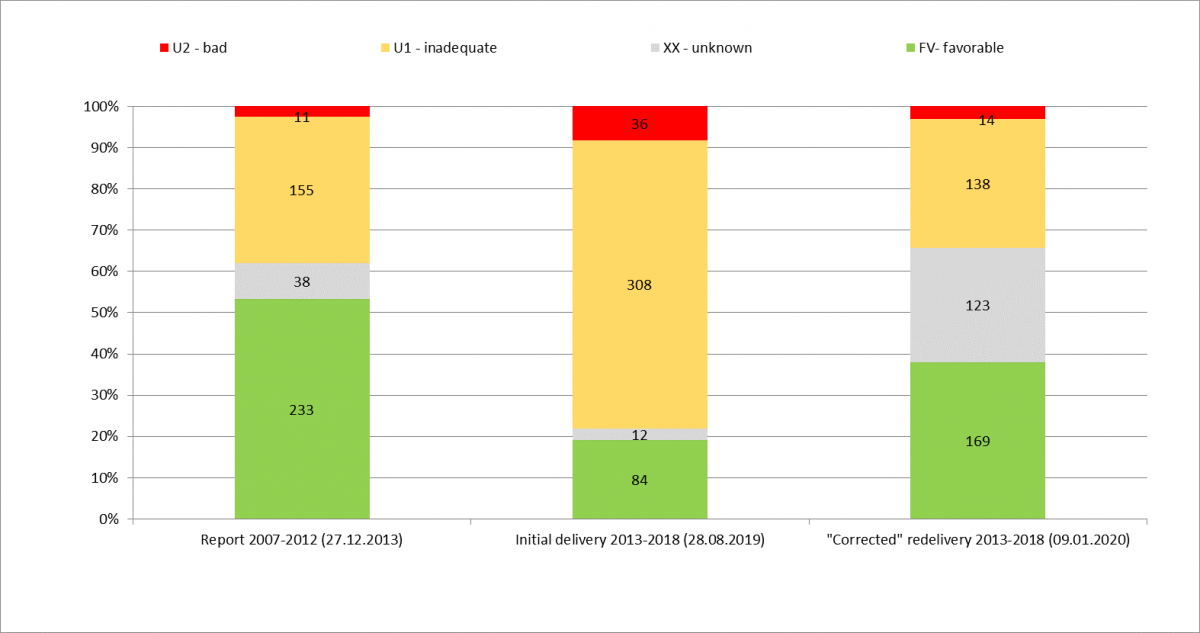 In this way very quickly the following results were achieved in the species assessments:

As a result of that “improved” edition of the last report, the Ministry of Environment reported that there are no problems in Bulgarian nature!

What does this lead to?

Firstly, those conservation assessments will be used as the basis for the National Priority Action Framework which must propose the active conservation measures for the species and habitats reported in bad or inadequate status. The latest edited report would lead to no planning of such measures for nearly 70 % of the protected species - those with favourable and unknown assessments.

Secondly, these conservation status assessments will be used in the management of Natura 2000 (planned within the so-called Document for the purposes of Natura 2000), and in the pending designation acts for hundreds of protected sites. These documents will also include active conservation measures only for the species assessed as being in a bad or an inadequate status. Thus, within these management tools nothing will be done for the active protection of these species either.

Meanwhile, the passive conservation in terms of appropriate assessments will go on for all the species and habitats. It is not influenced by the conservation status and faking the statistical data will not change anything in the appropriate assessment process , despite the threatening scenarios of some media of all the species and habitats that had scared the employer associations.

The fake data should be paid for by the Operation Program Environment 2014-2020 - that is, by the European taxpayers. Most probably the Commission will not accept these expenses and in the end, they are most likely to be covered by the Bulgarian taxpayers.

Art.11           “Member States shall undertake surveillance of the conservation status of the natural habitats and species referred to in Article 2 with particular regard to priority natural habitat types and priority species.”

Art. 12, paragraph 1           “Every six years …. Member States shall draw up a report on the implementation of the measures taken under this Directive…”